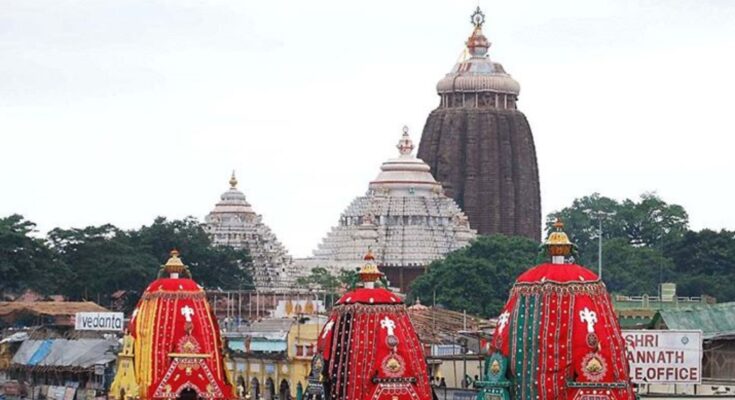 The land of Odisha is famous for the holy temple of Shree Jagannath Puri. Puri Jagannath mandir is one of the Char Dhams declared by Adi Shankaracharya. This temple is associated with Lord Jagannath, Sister Subhadra, and brother Balabhadra. This world-famous temple of Puri has various stories and many devotees. The Puri Jagannath temple is also famous for its Rath Yatra, which takes place annually. Devotees from far land come to witness the most incredible and magnanimous Rath Yatra.

Today in this blog article, we will uncover the Jagannath Puri story, share the history of Puri Jagannath temple, and discuss other places which you can visit while traveling to Puri.

Jagannath Puri Temple was a 12th-century temple constructed by the king of the Ganga Dynasty, Ananta Varman Chodaganga Deva. The temple’s construction was completed around 1174 AD, under the reign of Anangabhima Deva. The temple was subject to invasion by many invaders. Almost 18 times, different emperors invaded the temple and looted it.

The temple is based on Oriya architecture. There are around 120 shrines and temples inside the main temple of Jagannath Puri. There are 5 main structures inside the temples:

A very intriguing story is associated with the Puri Jagannath temple. The story goes back to the times of the Mahabharata yuga. After the war of Mahabharata, Gandhari cursed Krishna. The curse was that Yadav clans would putrefy fighting each other the way her children died in the war. Krishna accepted the curse. After 36 years of war, the curse came true. All Yadavs died fighting each other. After that, one fine day, Krishna was sitting under a tree and playing his flute. A hunter named Jara misunderstood Krishna’s foot as a lurking deer and shot his arrow at Krishna’s foot. As soon as Jara got to know his mistake, he asked for penance. Krishna, before dying, forgave Jara. Arjuna performed the last rites of Krishna. During the last rites, the whole body of Krishna turned into ashes except his heart. It is said that Arjuna immersed the heart in the sea near Dwarka (Gujrat). The heart turned immediately into a blue stone. With the passage of time, the heart traveled to the coast of Orissa. King Indradyumna carried the heart and places it in a log of wood. Later the temple of Jagannath was established, and King placed a log of wood carrying the heart of Krishna inside the temple.

After every 12 years, the selected priests change the heart from the old idol to the new idol made up of wood. This ritual is considered sacred, and the priest who does this is blindfolded first. So, this is the story associated with the origin of Lord Jagannath.

Hope you had a great time reading about one of the famous pilgrim places in India. We have more on our website, to check our other posts, keep visiting Travelist.

View all posts by Tushar K →

11 Best Cafes in Delhi You Must Try Out

10 Best Honeymoon Destinations Around the World